All of the leftover iron ore from every carriage in front of us is going airborne.

We’re moving fast enough that the wind whistles in the ears.

The air is thick with it, and there's nowhere to escape.

We each have a unique way of solving the problem. Manos pulls out a thick, black, woollen surgeons mask. I'll be fucked if I know where he got that from... I'm fuckin jealous.

To cover his eyes he borrows my aviator sunnies. He looks like he could be a new Mortal Kombat character, half Scorpion, half Johnny Cage.

He's done such a good job that he's only got a slit left for his eyes, which he covers with his sunnies.

I take my bandana that I usually wear inside my helmet and wrap it across my mouth and nose like a train robber from an old Western movie.

Not so badass... But the train robber bit is topical at least. I look the part.

We’re pinging on the awesomeness of just being here. 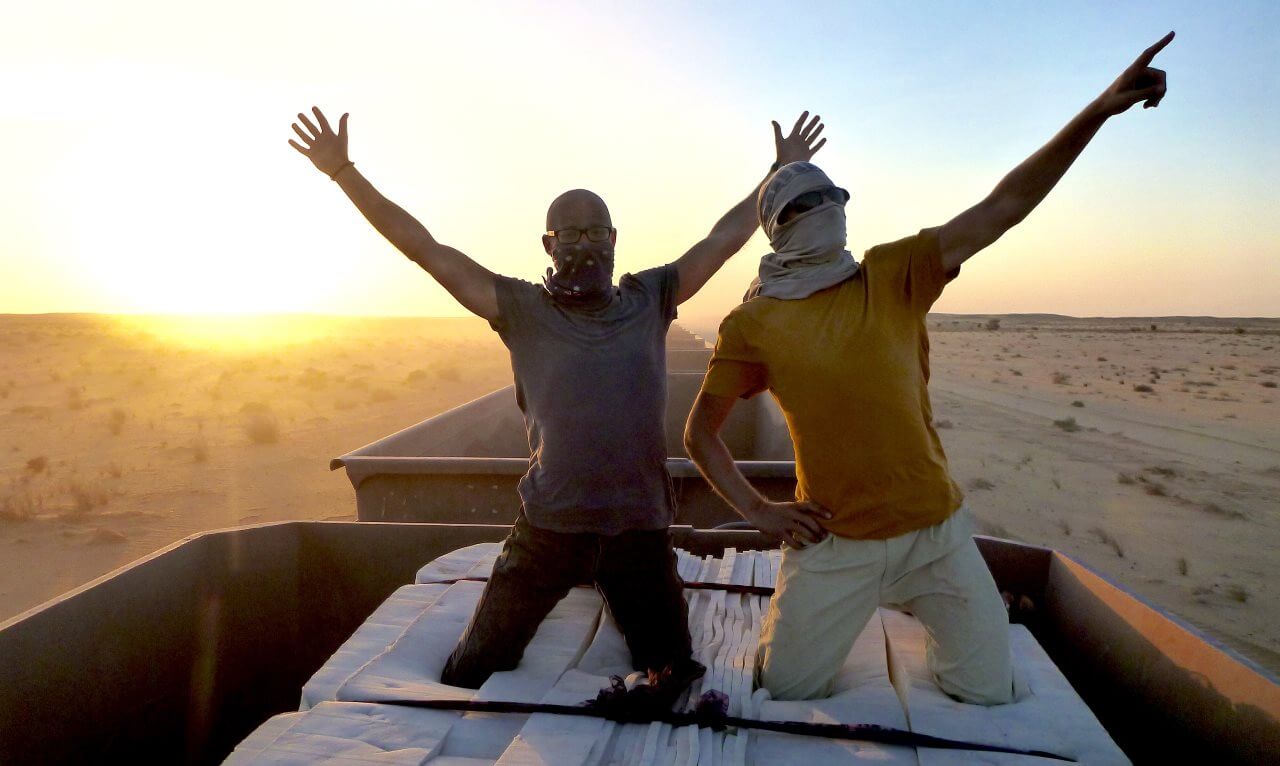 We start doing dumb shit with lots of energy...

Ben starts 'surfing' on the mattresses. Standing up. The carriages are swinging and bouncing all over the shop, but he’s making it look pretty easy. Monkey-see monkey-do, as Manos gets up there to give it a crack.

He almost immediately comes a gutser, very fucking close to going over the edge. His sphincter won't unlock for a few hours, I reckon...

Mum would never forgive me if I died trainsurfing the Sahara Desert...

Our giddy enthusiasm lasts for a few hours.

We calm down, and settle in for the long haul.

It's just us and the dunes of the Sahara.

The sun’s slowly making its way to the undulating horizon. Through the thick dust cloud I can stare right at it without hurting my eyes. Kind of like wearing a welders mask.

I've never noticed it before, because I've never been able to look right at it like this - without the glare and brightness - but the sun is just a clear, round orb.

The odd thought occurs to me that we’re orbiting around this monstrous ball of fusing hydrogen - right now - just obliviously hurtling around it.

And I get that 'infinitesimally small' feeling that I get when I look up at the stars in the night sky for long enough. Existential crisis territory.

But this is in the broad daylight, in the middle of the Sahara, on an iron ore train... It makes me feel insignificant and puny in the most fantastic way. Like it doesn't matter what I do, ever, the universe just doesn’t give a shit. Will never give a shit.

It’s a strange notion that I find empowering. It’s a wonderful justification to do just about anything... Just like this. Case in point.

If the universe doesn’t give a flying fuck, then why should I?

Things get dark, and chilly. Fast.

We chow down the food that we brought along: A couple of baguettes and some liquid cheese that I swear will outlast the apocalypse. Christ knows what’s in that garbage...

Half of what we eat is food. The other half is dust...

A local bloke comes along, he's been jumping between the carriages. Fucking maniac.

He gives us some oranges. Bonus. We love this guy.

We lay out on the mattresses and stare up at the canvas of stars through the dust, for the long, long ride.

The dust seems to get even worse, if that’s possible. Flash photography won’t work anymore; it’s just a whiteout of lit-up dust.

Imagine someone throwing a fistful of talcum powder into your face - point blank - every ten seconds, with your eyes and mouth open...

Tear ducts are in overdrive to try and keep the eyes clear.

Balls of mud made up of tears and dust had formed up on the sides of my eyes. The gunk is about the size of a ball bearing. That can’t be good for ya...

The three of us try to get some sleep, but that's going to be complicated. For one, we have to get off the train at a place called Choum, which isn't the last stop, so we don't want to sleep through it... Second, every time the train accelerates or decelerates, stops or starts, it makes that crescendo of terrifying banging as the carriages either smash together or smash apart, just like it did at the very start.

It happens all the time.

Even though I can hear it coming a mile away (literally) it still makes me shit my pants as it comes smashing through our carriage. It's that loud.

We make a game of screaming “INCOMING!!” every time we hear it start up at the front, like we're in a fucking war movie.

While we're trying to sleep, our mate with the oranges brings us blankets, he even tucks us in.

It must be somewhere near dawn...

A long time ago things changed from being an adventure into being a grind... The senses have been almost constantly assaulted, barely without respite.

The train has been stopped in the middle of the desert for an inordinate amount of time. What could they possibly be doing??.

I sit up and look around. Fuck all...

A random guy walks past. I pop the question.

I raise the alarm. We scramble.

Chucking our shit over the edge onto the sand and jumping out before the train takes us to the fucking mines...

The train leaves, and there's an eerie silence in the dark...

Was there a plan for this?

I'm being squashed. In a car. Full of black people.

I start making panicked noise... then it all comes back to me in a rush.

I remember getting in this car...

I calm my smashing heart and try to remember what's going on in my half-sleep. There's, how many... nine blokes in the cab of the ute. I remember one bloke sitting on top of the huge pile of dried fish on the back, so that makes ten. I wouldn't be surprised if I was dreaming of being a sardine, the image is perfect, but the man who's sitting on me has got his armpit right up my nose, so that's covering the smell. I don't know what's worse; this bloke smells like he's never had a shower in his life... He probably hasn't...