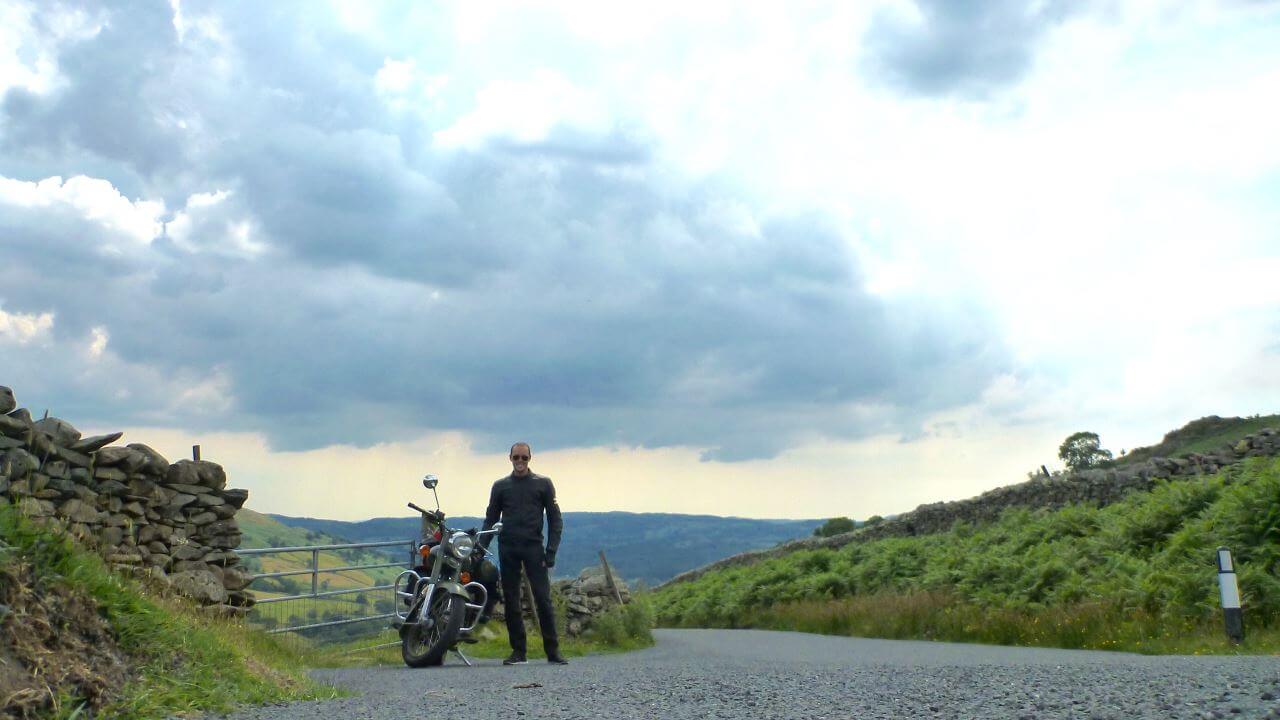 I gone done a whole bloody lap of England and Scotland.

It's been nothing like I expected. Outside of the big city centres, it's all so green, so rural.

When the sun's out and shining you'd be hard-pressed to top the United Kingdom for a ride...

I love pies and warm beer and shitty fish and chips.

I've been utterly surprised and delighted with all of it.

I never want to leave...

I've been copping it. Being on a bike in the drizzling rain is the pits. Fucking miserable.

Discomfort aside, I even managed to crash the bike while being a silly dickhead in the Scottish Highlands. Thoroughly scared the shit out of me.

I've never crashed a bike before. It was a bit surreal...

I was leaning the bike over as far as it will go in the wet, and then a little further... The whole thing just let go. Couldn't recover the slide and hit the tarmac. The landing was about as hard as falling off a chair sideways.

In that falling instant the bike felt so heavy. All two hundred kilos of it.

Bang, and the bike and I go pirouetting across the road and into the oncoming lane, bright orange sparks flying everywhere like an angle grinder.

While sliding across my hip I'm thinking, clearly: 'remember this, this is a crash.'

I got up shaking like a leaf. Checked to make sure I still had all my fingers.

A car came flying the other way while I picked up my bike. If they'd been a bit sooner, or me a bit later, it would have been messy...

The old duck in the oncoming car jumps out and gives me a bottle of 'Lucozade'. Sugary drink. Apparently that helps with the shock.

Damage to me and the bike was purely cosmetic. Bruises and some missing skin off the fingers for me, nothing a hammer couldn't fix for the bike.

Honestly, with the amount of Scotch I drank at some of those Scottish distilleries... I was very lucky to get away from the UK so lightly...

Which is why I have to leave.

Which is why I'm in Dover. Which is a shithole.

Right at the arse end of southern England.

On the other side of The Channel is France.

I'm shitting my pants a bit about the crossing... I don't have the right papers for the bike...

I had to cheat a little to get the bike insured/registered in England because I'm not a resident here. I don't even have an international drivers license... One quick check of my papers at the border and I'll be in the shit...

At the long line-up of vehicles for the ferry I do that dickhead thing that motorbike riders do and cut straight to the front.

The bloke behind the perspex takes my ticket, scans it, looks at my passport, and gives it all back.

I roll the bike into the bowels of the ship. The Enfield sounds incredible in this enclosed space (I give it a bit of wrist... Shit yeah!)

I ratchet-strap the beast down for the ride.